In February of 1847, when the New York Academy of Medicine was just a month old, two founding Fellows of the Academy nominated Dr. James McCune Smith for fellowship, that is, formal membership in what was being set up as an elite medical organization. Smith was the first professionally trained African American physician in the United States, although he earned his degrees at the University of Glasgow, having been unable to gain admission to an American medical school because of his race. An accomplished physician who met all the criteria for fellowship, Smith was denied admission to the Academy at that time. In 2018 the Academy finally redressed that wrong by awarding him fellowship posthumously, 171 years later.

The identity of the first Black physician to become a Fellow of the Academy remained a mystery, though. Puzzling it out required reading a chapter of a frequently consulted resource, Gerald Spencer’s Medical Symphony, in a different way. Spencer was the subject of a blog post back in 2014, and his book, despite its frustrating lack of citations, provides a wealth of information about the contributions of Black Americans to medicine in New York. Chapter VII focuses on membership in local medical organizations, beginning with a section on the various county medical societies, and moving on to NYAM and others. A list of Black Americans who had been elected as Fellows by 1947, when Spencer’s book was published, appears on page 75:

The first name on that list is Dr. Peter M. Murray. While Spencer never states that the names are listed in chronological order of election, an examination of the minutes of the Committee on Admissions confirms that this is the case. Murray appeared on the waiting list of nominees on April 6, 1932, along with the names of his three recommenders, and on January 4, 1933, he was one of 17 physicians who were recommended for fellowship. For unexplained reasons, he was not elected at that time, and he was recommended again on November 6, 1935. He was formally elected at the first stated meeting of 1936 and so became the first African American Fellow of The New York Academy of Medicine.

When Murray became a Fellow in 1936, most of his major accomplishments lay ahead, although he was at the time of his nomination the president of the National Medical Association, the alternative to the American Medical Association set up by Black physicians who were often denied membership in the AMA because of their inability to join their local medical societies.

The child of a longshoreman and a laundress, Murray was born in 1888 in Houma, Louisiana. His family moved to New Orleans when he was 12, and his mother became a practical nurse at the New Orleans Women’s Hospital and Infirmary. Her experience there led her to suggest a medical career to her son. Murray graduated from New Orleans University in 1910 and got his medical degree from Howard University four years later. He then began his career as an intern at Freedmen’s Hospital in Washington, D.C., and continued working at the hospital as an assistant clinical professor of surgery and developing expertise in obstetrics and gynecology. At the same time, he took an appointment as a medical inspector for the public schools.

In his 1967 Journal of the National Medical Association biographical profile of Murray, W. Montague Cobb noted that “while President Woodrow Wilson was ‘Saving the World for Democracy’ and promoting the League of Nations abroad, Negro Federal employees were being discriminated against more than ever at home.”[1] Both Murray and his wife, Charlotte (Wallace), a professional singer and music teacher, felt that more opportunities would be available to them in New York, and moved there in 1921. Murray shared a Harlem medical office with Dr. Wiley Merlio Wilson, whom he had known when he was a Howard student, and initially he practiced surgery at the Wiley Wilson Sanitarium, a private hospital that Wilson opened due to the lack of opportunities to practice in other New York hospitals. The Harvard-trained Dr. Louis T. Wright,[2] had joined the staff of the public Harlem Hospital in 1919, and Harlem Hospital became the only New York institution where Black American physicians stood a chance of finding employment. Murray eventually joined the staff there in 1928 and later worked at two other hospitals, Sydenham and St. Clare’s, as well.

One of Murray’s most important accomplishments occurred in 1949, when the New York State Medical Society elected him as one of its representatives to the House of Delegates of the American Medical Association. He was at that time the only Black physician from anywhere in the country elected to serve as a delegate, and he continued in that role through 1961. He was also elected president of the Medical Society of the County of New York for 1954–55. It is possible that Murray’s support of the AMA’s opposition to the development of a national health insurance program in the 1940s played a part in those elections. He took the idea of broader service to the medical profession extremely seriously, though, accepting seats on the boards of trustees of Howard University, the State University of New York, and the National Medical Fellowships; appointment to the Board of Hospitals of the City of New York; a term as vice president of the Hospital Council of Greater New York; and membership in the President’s National Medical Advisory Committee on Health Resources.[3]

Service to NYAM also mattered to him, and he spent over 20 years as a member of the Committee on Medical Education, as well as serving on a variety of other subcommittees. In acknowledgment of his many accomplishments, both inside and outside of the Academy, he was awarded the Academy Plaque, which recognizes extraordinary service to NYAM, at the April 1969 annual meeting, just eight months before his death on December 19.[4]

[2] Louis T. Wright was, in fact, recommended for NYAM fellowship in 1928. After a challenge, the recommendation went through on October 1, 1930, but at the November 6, 1930, stated meeting the Fellows declined to elect him.

The Knick’s Dr. Algernon Edwards struggles for acceptance as a medical professional, even when his expertise and knowledge outstrips many of his colleagues. How unusual was his experience as an African American practicing medicine in turn-of-the-century New York? As medical training and practice became more heavily regulated in the latter half of the 19th century, access to the professions was constrained by issues of ethnicity, gender, class, and religion. 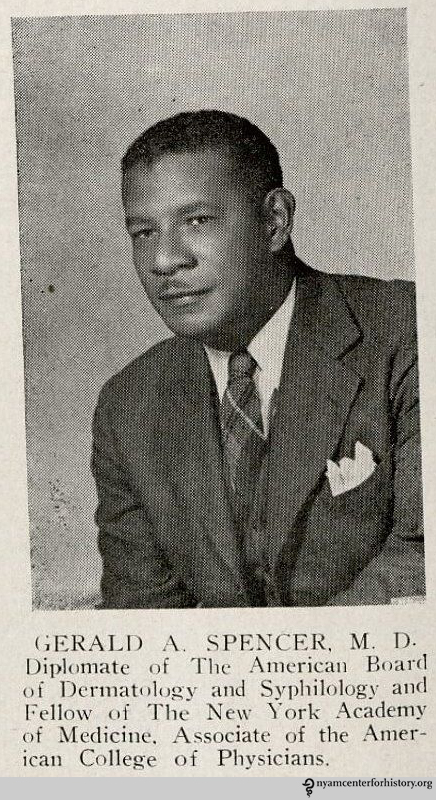 Gerald Spencer. From A Medical Symphony.

A slim green volume in our collections gives a small glimpse into some of the many stories of pioneering African American medical professionals. Our copy of the 1947 book Medical Symphony: A Study of The Contributions of The Negro to Medical Progress in New York is signed by author Dr. Gerald A. Spencer, a fellow of the New York Academy of Medicine. The volume brings together lectures and articles in which Dr. Spencer explores the attempt by African Americans to, in his words, join in “striving for medical symphony in which all races and creeds will be given the fullest opportunities to study and to make their unhampered contributions.”1

As Dr. Spencer describes, in the last quarter of the 19th century, around 12 African American physicians had graduated from schools in New York and other northern states. Together, they founded the McDonough Memorial Hospital, which commemorated David McDonough. McDonough, born a slave, was selected for an education by his owner as part of a bet to establish the potential of African Americans for learning. McDonough not only succeeded in his studies, but went on to gain his freedom and practice on the staff at the New York Hospital and New York Eye and Ear Infirmary. While it only operated between 1898 and 1904, McDonough Memorial Hospital established itself as being open to physicians, nurses, and patients of every background and nationality. Also established in 1898, the Lincoln Hospital Training School for Nurses in the Bronx was the only place for African American nurses to train after the closure of the McDonough Memorial Hospital until the opening of the Harlem Hospital School of Nursing in 1923.

Lincoln Hospital Training School for Nurses, Class of 1907. From A Medical Symphony.

Integration in New York hospitals, public health agencies, and medical societies was limited in the first decades of the 20th century, but by the 1940s, when Dr. Spencer wrote his volume, integration was making inroads in the city’s institutions. Dr. Spencer wrote Medical Symphony to emphasize the many African American physicians rising to positions of prominence within the hospital system, the enormous public health impact of trained nurses, and acceptance into learned societies.

Dr. Spencer was from St. Lucia in the British West Indies and studied at the College of the City of New York before receiving a medical degree from the University of Lyon, France, in 1932. Many students of African descent found the barriers to an education less intractable in European medical centers. Dr. Spencer became a resident physician at the Skin and Cancer Hospital in New York, and visiting dermatologist at Harlem Hospital. He also became a fellow of the New York Academy of Medicine in 1942, described by one of his referees as a “man of excellent character, scholarly and profound.”2

Disparities in access to health care, and access to the health professions, have not disappeared over time. However, Medical Symphony reminds us of the many stories of success that can be celebrated. For those interested in learning more about who became a doctor in New York over time, join us at “Who Becomes a Medical Doctor in New York City: Then and Now – a Century of Change” on December 11.

1. Spencer GA. Medical symphony: a study of the contributions of the Negro to medical progress in New York. New York: 1947.