The Knick’s Dr. Algernon Edwards struggles for acceptance as a medical professional, even when his expertise and knowledge outstrips many of his colleagues. How unusual was his experience as an African American practicing medicine in turn-of-the-century New York? As medical training and practice became more heavily regulated in the latter half of the 19th century, access to the professions was constrained by issues of ethnicity, gender, class, and religion. 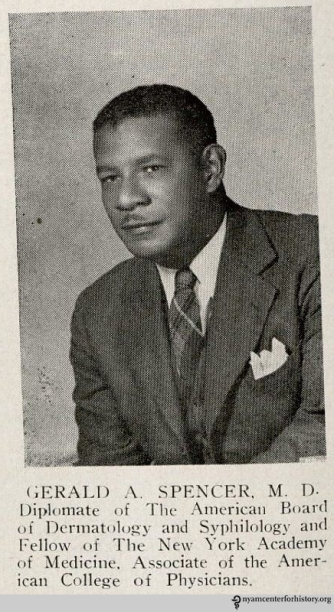 Gerald Spencer. From A Medical Symphony.

A slim green volume in our collections gives a small glimpse into some of the many stories of pioneering African American medical professionals. Our copy of the 1947 book Medical Symphony: A Study of The Contributions of The Negro to Medical Progress in New York is signed by author Dr. Gerald A. Spencer, a fellow of the New York Academy of Medicine. The volume brings together lectures and articles in which Dr. Spencer explores the attempt by African Americans to, in his words, join in “striving for medical symphony in which all races and creeds will be given the fullest opportunities to study and to make their unhampered contributions.”1

As Dr. Spencer describes, in the last quarter of the 19th century, around 12 African American physicians had graduated from schools in New York and other northern states. Together, they founded the McDonough Memorial Hospital, which commemorated David McDonough. McDonough, born a slave, was selected for an education by his owner as part of a bet to establish the potential of African Americans for learning. McDonough not only succeeded in his studies, but went on to gain his freedom and practice on the staff at the New York Hospital and New York Eye and Ear Infirmary. While it only operated between 1898 and 1904, McDonough Memorial Hospital established itself as being open to physicians, nurses, and patients of every background and nationality. Also established in 1898, the Lincoln Hospital Training School for Nurses in the Bronx was the only place for African American nurses to train after the closure of the McDonough Memorial Hospital until the opening of the Harlem Hospital School of Nursing in 1923. 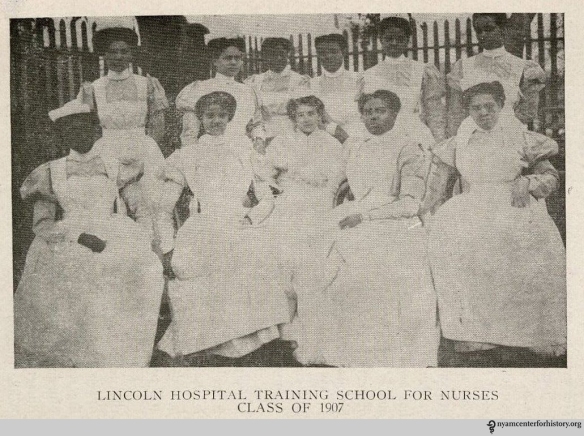 Lincoln Hospital Training School for Nurses, Class of 1907. From A Medical Symphony.

Integration in New York hospitals, public health agencies, and medical societies was limited in the first decades of the 20th century, but by the 1940s, when Dr. Spencer wrote his volume, integration was making inroads in the city’s institutions. Dr. Spencer wrote Medical Symphony to emphasize the many African American physicians rising to positions of prominence within the hospital system, the enormous public health impact of trained nurses, and acceptance into learned societies.

Dr. Spencer was from St. Lucia in the British West Indies and studied at the College of the City of New York before receiving a medical degree from the University of Lyon, France, in 1932. Many students of African descent found the barriers to an education less intractable in European medical centers. Dr. Spencer became a resident physician at the Skin and Cancer Hospital in New York, and visiting dermatologist at Harlem Hospital. He also became a fellow of the New York Academy of Medicine in 1942, described by one of his referees as a “man of excellent character, scholarly and profound.”2

Disparities in access to health care, and access to the health professions, have not disappeared over time. However, Medical Symphony reminds us of the many stories of success that can be celebrated. For those interested in learning more about who became a doctor in New York over time, join us at “Who Becomes a Medical Doctor in New York City: Then and Now – a Century of Change” on December 11.

1. Spencer GA. Medical symphony: a study of the contributions of the Negro to medical progress in New York. New York: 1947.