Charles Darwin was born on this day in 1809. The influence of this “most genial of geniuses,” to quote Stephen Jay Gould, continues.1

What has become more prominent in recent years is the field of evolutionary psychology, which promises a fully naturalistic account of the development of mind as well as body. But Darwin as well as other early 19th-century naturalists held that behavior was an integral part of evolution. Darwin’s precursor, Jean-Baptiste Lamarck, made behavior central to his mechanism for species change. His provided an account of the giraffe, whose incessant and continued stretching of the neck resulted in its slight lengthening, which transferred to the next generation—perhaps through the rush of “gemmules” from the somatic cells to the germ cells, as Darwin surmised in his Lamarckian moments. Over generations, this stretching led to the long-necked animal we have today. Behavior produces bodily change. Darwin posed nothing less, but he proposed the mechanism of natural selection: minute changes in the body or its use, if advantageous to producing offspring that inherit those changes, will over time fix the changes in a population.

Early accounts, and frankly, the way that evolution is often presented in high school classrooms, tend to obscure this. Much late 19th-century work emphasized establishing the fact of evolution, while downplaying the mechanism. Naturalists often focused on comparative anatomy alone, without a behavioral component. For example, one of the more famous “proofs” of evolution is the sequence of horse skeletons that Othniel C. Marsh of Yale set out in 1879—fossil bones put side-by-side.2 Even 20 years ago or so, Gould identified three central disciplines as the cornerstones of modern Darwinism: paleontology, developmental biology, and population genetics3; none of these had much to say about the way that living creatures interact with their environment.

But Darwin did. He served as a naturalist in the field during his four-year trip around the world on H.M.S. Beagle, and he was constantly seeing the living world as a whole. Yes, the specimens he collected eventually made their way to museum drawers, but he always recorded the back story. In his most famous example—the finches of the Galápagos—he was aware of how beak shape was linked to eating patterns, a behavioral characteristic, and how both interacted with the particular environments of each island. 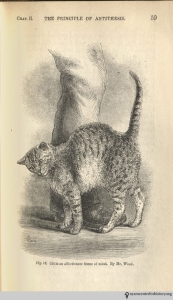 Charles Darwin. The Expression of Emotions in Man and Animals. London: J. Murray, 1872

Charles Darwin. The Expression of Emotions in Man and Animals. London: J. Murray, 1872.

Darwin always explored behavior. Chapter 7 of his masterwork, On the Origin of Species (1859), was devoted to “Instinct.” In later books, notably The Descent of Man and Selection in Relation to Sex (1871) and The Expression of Emotions in Man and Animals (1872), he elaborated his discussion of the evolution of behavior. But in all these books he looked at the “higher” animals, and that could be taken to mean that some element of purposefulness was at work. That is, as with Lamarck’s giraffe, a conscious agent may seem to be choosing a particular evolutionary path, rather than a path emerging by means of natural selection and other mechanisms. So Darwin famously looked at “lower” forms, connecting in them bodily structure, behavior, and environment. He worked on the zoology of barnacles as his major contribution to understanding the Beagle specimens. Above all, he was a botanist, writing books on the movement of plants, and on insectivorous plants, among other efforts. One of his last productions was on earthworms, including “observations on their habits.” His research brought home the three-fold connection of body, behavior, and environment in the evolution of new species, even in creatures that no one could consider conscious or willful.

Here then is the origin of evolutionary psychology. From the tropisms of plants and the habits of worms, to all of living nature, it is not only that our bodies that are evolving and changing in response to nature, but how we use our bodies as well: our conscious minds, but also our perceived instincts, and even our unconscious thoughts and feelings. Evolutionary psychology is built on this.

Charles Darwin. Courtesy of the National Library of Medicine.

The Descent of Man is a groundbreaking work, as relevant today as when it was first published in 1871. The Center for History owns 8 copies of this title, published 12 years after Darwin’s most well known work, On the Origin of Species. Both books sold out quickly, a sign both of Darwin’s persuasive writing, and people’s persistent interest in their origins! In the Descent of Man, Darwin explained the development of the human species by evolutionary processes. He particularly focused on two points: whether the ability to reason and to make moral judgments could evolve in the same way as could physical forms, and how beauty and other seemingly extraneous factors could have an evolutionary role. These were contentious issues, as mental abilities seemed to be a sharp divide between humans and animals, and the existence of order, harmony, and beauty seemed inconsistent with evolution. To think that man had “evolved from apes” seemed nonsensical and was much criticized; Darwin sought to make it plausible.

Here we examine a 1915 copy of the second edition, first published in 1874, which was greatly revised and augmented with extra illustrations in comparison to the first edition. In the preface, Darwin stated, “When naturalists have become familiar with the idea of sexual selection, it will, as I believe, be much more largely accepted; and it has already been fully and favourably received by several capable judges.” He also acknowledged the criticism he received, referring to the “fiery ordeal through which the book has passed,” and welcomed the observations “of Prof. Huxley, on the nature of the differences between the brains of man and the higher apes.” In a series of debates in the early 1860s with noted anatomist Robert Owen, Darwin’s compatriot T.H. Huxley had demonstrated the essential structural continuity of human and ape brains, providing another piece to the puzzle. Darwin knew and accepted that his theories would provoke a backlash, and he modified the details as needed, but he also held steadfast to his original concepts.

A Table of the Principal Additions and Corrections to the Edition of 1874 compares the 1st edition of 1871, the 2nd of 1874, and the 2nd edition “new printing” of 1888, and is included in the opening pages. Especially interesting are: “Cases of men born with hairy bodies”, and “Resemblances between idiots and animals”. 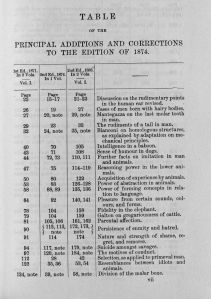 The engravings reference the differences among males and females of the same species, to illustrate the concept of sexual selection. The species depicted ranged over many classes, including insects, crustaceans, reptiles, birds, and mammals. The engraving below helps to explain how the beautiful plumage of the male bird attracts the female. 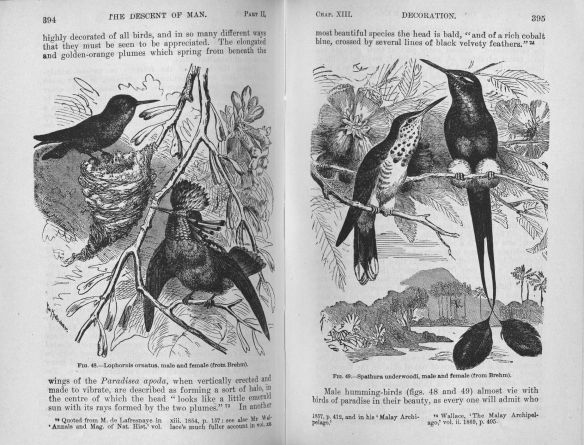 This edition also includes a reprint from an article in Nature, from November 2, 1876, which Darwin wrote to explain his misinterpretation of the “brightly-coloured hinder ends and adjoining parts of monkeys.” He was wrong in assuming that the bright color was for attracting the opposite sex. He read an article by Herr J. von Fischer, who studied monkeys, even keeping them in his house, which explained that the reason was more straightforward: the species would “turn this part of their bodies . . . to him when they are pleased, and to other persons as a sort of greeting.” Surely, Darwin was unafraid to own up to his mistakes.

The book also hosts a tightly-worded index of over 40 pages, where can be found references to the color of Kingfishers, dogs dreaming, and the liability of monkeys to the same diseases as man.

This volume of work has long been the cause of both scientific inquiry and challenge, and continues to be a work of enduring scientific importance.

Darwin, Charles. (1915). The Descent of Man and Selection in Relation to Sex. New York: D. Appleton and Company.