We’ve entered the season of hot, humid, frizzy-headed misery outside and freezing temperatures from blasting office air conditioners inside. Which got me to thinking: What impact did air conditioning have on medicine? 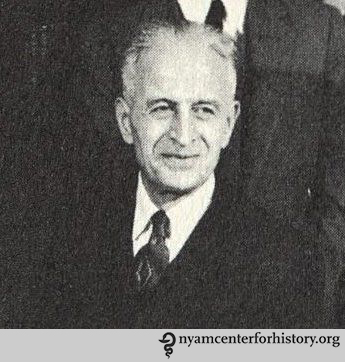 One man did impressive work on this front. Constantin P. Yaglou (1897–1960) was not a physician, but a professor of industrial hygiene at Harvard’s School of Public Health. Born in Constantinople, he came to the United States in 1920 and earned a master’s degree from Cornell. He joined the Research Laboratory of the American Society of Heating and Ventilating Engineers in 1921, where he spent five years studying the influence of humidity, temperature, and air circulation on working and resting adults. In 1925, he joined the department of industrial hygiene at Harvard.1

His cross-disciplinary collaboration with Harvard Medical School’s pediatrics department, notably Dr. Kenneth Blackfan, proved innovative. Assisted by nurse Katherine MacKenzie Wyman, they published “The premature infant: A study of the effects of atmospheric conditions on growth and on development” in the American Journal of Diseases of Children in 1933. 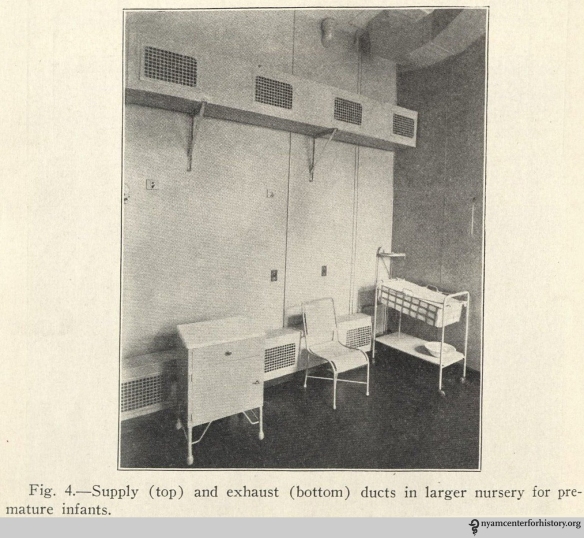 The air conditioning unit in a nursery for premature infants. In “The premature infant: A study of the effects of atmospheric conditions on growth and on development,” American Journal of Diseases of Children, 1933, 46(5).

They studied the effects of Harvard’s newly air conditioned nursery from 1926–1929, and compared their measurements to those from pre-air conditioned 1923–1925. (From 1926–1929, they controlled for variables like diet and dress.) They found that premature infants were less able to stabilize their body temperatures than infants born at term. Even among premature infants, ability to regulate temperature changed depending on birth weight. They determined the ideal temperature for premature newborns to be 75-100 degrees Fahrenheit with 65% humidity.2 These influential findings lay a foundation for the development and use of temperature-controlled incubators.3

Yaglou published a figure neatly summarizing the study’s major results in JAMA in 1938:

This figure comes from Yaglou’s broad-reaching “Hospital Air Conditioning,” which brought together studies on air conditioning’s effects in the operating room, recovery wards, premature nurseries (summarizing his prior work, as in the figure above), fever cabinets, allergen-free rooms, and oxygen chambers.4

According to the article, not only did air-conditioned operating rooms help those involved in surgery feel more comfortable, it also reduced “the risk of explosion of certain anesthetic gases.”4 In the post-operative recovery rooms, air conditioning reduced the risk of heat stroke and improved the body’s ability to recuperate, though Yaglou did not recommend a particularly cool temperature. “With a relative humidity of about 55 per cent,” he wrote, “a temperature of about 80 will probably prove acceptable.”

But even with the benefits of air conditioning discussed in the article, it was difficult to employ at a large scale in the late 1930s. Yaglou concluded, “High cost precludes cooling the entire hospital, but the needs of the average hospital may be satisfactorily fulfilled by the use of built-in room coolers in certain sections of the hospital and a few portable units which can be wheeled from ward to ward when needed.”4

In addition to his work in medical settings, Yaglou also performed military research on extreme climates like the Yukon, the tropics, and the Arizona desert, “working with volunteers to determine the limits of human endurance under severe heat, cold and humidity.”5 Perhaps it should come as no surprise that the UK Antarctic Place-names Committee christened Yaglou Point in his honor in 1965.6