When the battleship Maine blew up in Havana Harbor, February 15, 1898, Clara Barton was within earshot:

The . . . work of that fifteenth day of February held [us] busy at our writing tables until late at night. The house had grown still; the noises on the street were dying away, when suddenly the table shook from under our hands, the great glass door opening the veranda, facing the sea, flew open; everything in the room was in motion or out of place—the deafening roar of such a burst of thunder as perhaps one never heard before, and off to the right, out over the bay, the air was filled with a blaze of light, and this in turn filled with black specks like huge spectres flying in all directions. . . . A few hours later came the terrible news of the “Maine.”1 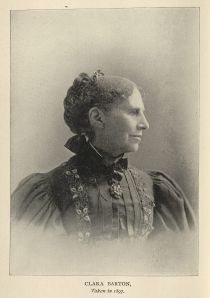 Clare Barton. From The Red Cross in Peace and War, 1899. Click to enlarge.

Barton (1821–1912) was doing what she did best: ministering in the midst of catastrophe, bringing aid and comfort, “always going where suffering humanity most needed her.”2 The list of her engagements is a roll call of later 19th-century history. In addition to Cuba (1898) were the battles of Second Bull Run and Antietam (1862), the Franco-Prussian War (1870–1871), the Johnstown Flood (1889), Russian famine relief (1892), the Armenian massacres (1895–1896), and the Galveston hurricane (1900), among others. What better time to remember her achievements than Women’s History Month and Red Cross Month?

During her extended stay in Europe from 1869–1873, she became acquainted with the Red Cross movement, which she brought back to the United States and formalized with a charter for the American Red Cross in 1881. Yet although she headed this organization until 1904, she remained in the field from her early 40s until she was almost 80.

Humanitarian work brought her to Cuba. Spanish policy established camps to control the discontented rural Cuban population beginning in 1895. These turned into disastrous places of human suffering, and in January 1898 President William McKinley formed a President’s Committee for Human Relief (also known as the Central Cuban Relief Committee) for the camp sufferers, or reconcentrados. The Committee included a Red Cross representative, Barton’s nephew, Stephen E. Barton. By shedding this duty, Clara was free to go to Cuba, to enter the field, in her words, “simply as a willing assistant . . . an individual helper in a work already assigned.”1 She was anything but! Barton was on the ground in Havana assessing the situation starting February 9. As part of her fact-finding mission, two days before the explosion of the Maine, she lunched aboard the ship with its captain.2 On the day after the explosion, she wired McKinley, “I am with the wounded”—as indeed she was.2 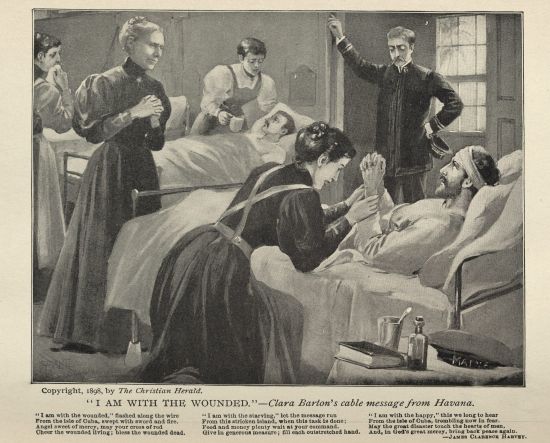 “I am with the wounded.” Originally printed in The Christian Herald and reprinted in The Red Cross in Peace and War. Click to enlarge.

Though she was devoted to impartially aiding human suffering, Barton’s efforts in Cuba got swept into the maelstrom of politics. Spanish authorities resisted her investigations, and her reports of the reconcentrados’ suffering helped push the United States into war. Her relief efforts were then caught up by that war: back from Cuba by March, she tried to return on April 25 with relief supplies, but war had been declared two days before. Her ship, the State of Texas, was held at Tampa; providing food and medicine to Cuba was the last thing that the belligerent American government now wanted. 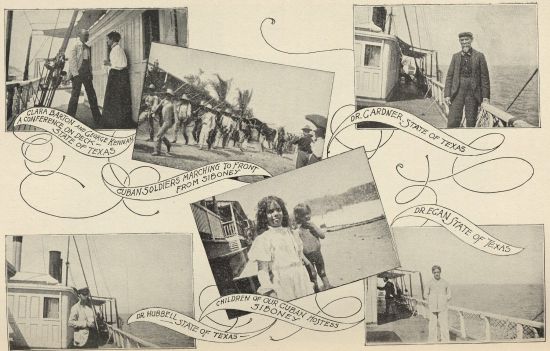 A photomontage of Barton’s return to Cuba and time on the ship the State of Texas. From The Red Cross in Peace and War. Click to enlarge. 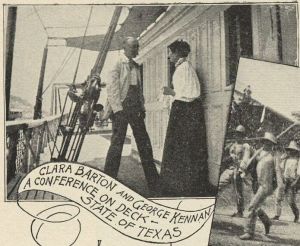 Barton with Keenan, a close-up from the State of Texas photomontage. Click to enlarge.

Only on June 20 did the ship follow the American fleet as it set out to engage the Spanish, and only in mid-July did it enter Santiago harbor, leading the American flotilla, with Barton “standing on the forward deck, . . . queenly and majestic.”2 She pushed to get her nurses access to the war wounded on both sides, organized relief aid delivery to Santiago, and established soup kitchens, clinics, and orphanages. As journalist George Kennan observed: “I did not happen to see any United States quartermaster in Cuba who, in the short space of five days, had unloaded and stored fourteen hundred tons of cargo, given hot soup daily to ten thousand soldiers, and supplied an army of thirty-two thousand men with ten days rations. It is a record, I think, of which Miss Barton had every reason to be proud.”2 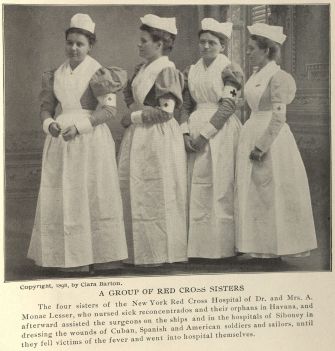 “A group of Red Cross sisters.” Photo taken by Barton and published in The Red Cross in Peace and War. Click to enlarge.

By all accounts Barton was both a master logistician and a compassionate presence in the face of human suffering. Doing so—being so—was a point of pride and identity for her, the touchstone of her feminism. This was shown even some six years before Cuba. Barton gave voice to “women’s ministering presence” in a poem, “The Women Who Went to the Field.” Composed for a November 18, 1892 Washington banquet of the Woman’s Relief Corps (an auxiliary group of the Civil War veterans organization, the Grand Army of the Republic), Barton celebrated the female battlefield nurses of America’s terrible war. Indeed, being at the battlefield was the point, as she lifted up an ideal of women’s courage, while caustically calling into question common assumptions about women and battle:

The women who went to the field, you say,
The women who went to the field; and pray
What did they go for? Just to be in the way!
They would scream at the sight of a gun, don’t you see?
…
They might pick some lint, and tear up some sheets,
And make us some jellies, and send on their sweets,
And knit some soft socks for Uncle Sam’s shoes,
And write us some letters, and tell us the news.
And thus it was settled by common consent,
That husbands, or brothers, or whoever went,
That the place for the women was in their own homes,
There to patiently wait until victory comes.

But the Civil War experience put the lie to these assumptions:

But later, it chanced, just how no one knew,
That the lines slipped a bit, and some ’gan to crowd through;
And they went,—where did they go?—Ah! where did they not?
Show us the battle,—the field,—or the spot
Where the groans of the wounded rang out on the air
That her ear caught it not, and her hand was not there;
…

What was women’s role in battle?

And these were the women who went to the war:
The women of question; what did they go for?
Because in their hearts God had planted the seed
Of pity for woe, and help for its need;
They saw, in high purpose, a duty to do,
And the armor of right broke the barriers through.
Uninvited, unaided, unsanctioned ofttimes,
With pass, or without it, they pressed on the lines;
They pressed, they implored, till they ran the lines through,
And that was the “running” the men saw them do.
…

That is, women ran into battle, not away!

And then she tied women’s courage to the Red Cross movement:

And what would they do if war came again?
The scarlet cross floats where all was blank then.
They would bind on their “brassards” and march to the fray,
And the man liveth not who could say to them nay;
They would stand with you now, as they stood with you then,—
The nurses, consolers, and saviors of men.2,3

Hers was a noble vision, founded on the battlefields of Bull Run and Antietam. Barton found a nursing and consoling role for women at those battlefields. She also found a logistical role for women in relief organizations, but for her, the presence of women in battle—her own presence in battle—remained defining. That presence was contentious in her time; today, the debate continues over whether to draw the line between men’s and women’s roles in battle. Yet one wonders, with Barton, whether the issue of women’s courage lies at the bottom of this debate.