Laura Robson, the author of today’s guest post, is our 2014–2015 Helfand Research Fellow. She completed her PhD in Classics at the University of Reading, UK.

“I wish the Epitome had not been spoiled so disgracefully by a certain Englishman (who I think lived with my brother for a time). He took what had been written with great care succinctly as a list in the Epitome and expanded it with excerpts taken from the books of the Fabrica… He utterly corrupted what had made it most praiseworthy and so roughly and absurdly copied what had been set forth with elegant drawing and engraving that he preserved no appearance of Oporinus’ majestic edition.”1

These were the concerns of Franciscus Vesalius, brother of the famous anatomist Andreas Vesalius, published in the preface to The China Root Epistle in 1546. Within only three years of the original publication of Andreas Vesalius’ De Humani Corporis Fabrica and its companion work, the Epitome, a number of medical authors had copied and reproduced the beautiful illustrations that had made Andreas Vesalius and his work so famous.2

The Fabrica was one of the first anatomical treatises of the 16th century to present illustrations of the anatomised body in a naturalistic way. Vesalius promoted the dissection of the human body as the best way to learn about anatomy. By performing human dissections, he uncovered errors in the work of the ancient anatomist Galen, whose use of animals as dissection material to substitute for the lack of human cadavers had dominated the understanding of the body for centuries. Vesalius was caught in a conflict: how to show the anatomical errors in Galen’s treatises without going against such an important medical authority and potentially damaging his own medical career. He used the Fabrica to present his findings and to build on Galen’s important work.

The Fabrica contained 700 folio pages of Latin text and beautiful woodcut illustrations depicting the anatomical body in different poses. Readers were signposted to turn back and forth several times between image and text. This, as well as each image being accompanied by a letter key, encouraged a very active reading of Vesalius’ treatise.3 The work proved popular, with people taking a particular interest in the figures, although people copied, adapted, and reused both the images and text of Vesalius’ work in many different medical treatises. Due to the size and high cost of the Fabrica, cheaper copies were often more accessible than the original, even though the pirating enraged Vesalius and his close circle. Book piracy was common at this time. There was not the modern sense of intellectual property or copyright legislations. Licenses allowed particular printers to print works first, but the Venetian and imperial privileges obtained by the authors to try and protect their books from piracy did little to stop others from copying them.4

In fact, Franciscus Vesalius accused the wrong man of copying his brother’s work (suggesting, perhaps, that he had not seen a copy of the offending book). The only Englishman known to live with Vesalius was John Caius, when they lodged together in Padua during their studies. Caius went on to be physician to King Edward VI. There is no evidence that he pirated any version Vesalius’ work.5

The work Franciscus refers to is in fact Thomas Geminus’ Compendiosa.6 The first edition is predominantly made up of the Latin text of the Epitome and its illustrations, with the addition of many Fabrica figures. It is believed to be one of the first books to use copperplate illustrations.7 Geminus stated in his dedication that he followed Vesalius, but shortened his book to make it more useful to readers, in particular students.8 Reproducing the images of the Fabrica with the text of the Epitome meant that there was little interaction and connection between the two. However, the publication of the Compendiosa did bring Vesalius’ illustrations to a wider audience as the book was shorter and therefore cheaper than the original.

In order to make the work more accessible to those who could not read Latin, Geminus published an English edition of the Compendiosa in 1553. Nicholas Udall translated the short captions from the Fabrica figures into English. However, the main text of the Epitome was not translated. Instead the illustrations were placed after the text of Thomas Vicary’s The anatomie of mans body, first published in 1548.9 Geminus rearranged this text to follow the order of dissection for the parts of the body that decayed the fastest—the abdomen, the thorax, and the head. Although the images were not rearranged to fit this order, they connected more strongly to the text than in the Latin edition, as readers were signposted to particular figures discussing different parts of the body.

In his preface to the English Compendiosa, Nicholas Udall puts forward some interesting points about the uses of images and texts in medical manuals of his time. He said he did not know whether images or texts were more important when presenting anatomical information. He argued that information is set forth in writing for “high learning” and in pictures for the unlearned. He also explained that surgeons often performed duties like resetting bones by looking at figures alone.10 Surgeons had a low status in the medical profession at this time. They were not university educated like physicians and they were accused of having little knowledge about the science of medicine and healing. This suggests that readers who could not understand Latin, like surgeons, used anatomical figures and not written texts. I believe the English version of the Compendiosa was an attempt at encouraging these readers to read the text as well, by providing it in the vernacular language. 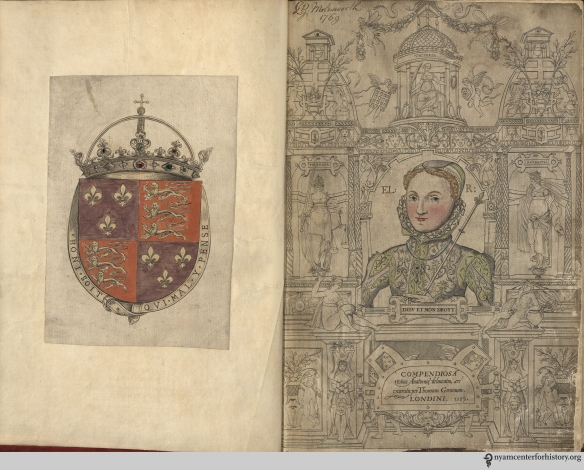 The coat of arms, left, and title page, right, of the Academy’s copy of the 1559 English edition of Geminus’ Compendiosa. Click to enlarge.

In 1559 the English edition of Geminus’ Compendiosa was reissued.11 The annotated copy of this edition in the collection at the New York Academy of Medicine reveals hints as to how this anatomical text was used by readers at the time. The coloured and illuminated title page includes a portrait of Queen Elizabeth I. Slithers of gem stones have been attached to her necklace and the coat of arms opposite her on the adjacent page. The nude figures known as Adam and Eve are also coloured, and a reader inscribed the verse, “The Eyes of Them Both were opened, and They knew that They were naked: Genesis Chapter 3 Verse 7.” 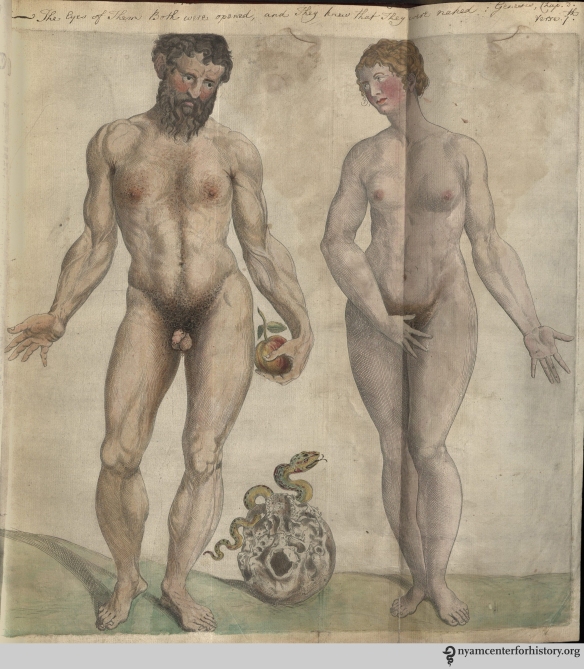 Adam and Eve in the Academy’s copy of the 1559 English edition of Geminus’ Compendiosa. Click to enlarge.

Two readers annotated this copy, both with different handwriting from the owner who in 1769 wrote his name—“G. Molesworth”—on the title page. One reader underlined key words and sections of the text, marking these with almost illegible notes in the margins. The other reader, though, focused on the illustrations. This second reader annotated the first three Vesalian musclemen images in the copy, adding the letters of the key, along with the Latin names for the body parts they represent.12 This English edition of the Compendiosa seldom uses the Latin names for parts of the body. So our reader did not get the information for his notes from this edition of the text. He must have consulted another text, such as the Latin edition of 1545, or even the original work of Vesalius’ Fabrica, in order to make his annotations.

The annotated muscleman figure in the Academy’s copy of the 1559 English edition of Geminus’ Compendiosa. Click to enlarge.

This demonstrates the culture of active reading in the early modern period. This reader engaged with more than one treatise, perhaps even several works, when learning about the dissection of the body. He was familiar with the Latin language, and was therefore not one of the unlearned readers mentioned by Nicholas Udall in his preface to the work.

While Andreas and Franciscus Vesalius opposed the reproduction of the Fabrica and Epitome, the works that copied, adapted, and reused material from these texts allowed for the transmission of Vesalius’ knowledge of the body to a wider audience than the original works could reach. And this new audience interacted with the material, coming to a greater understanding of the dissected human body in the early modern period.

4. On history of copyright and pirating see Christopher L. C. E. Witcombe (2004), Copyright in the Renaissance: Prints and Privilegio in Sixteenth-Century Venice and Rome, Leiden.

5. See Charles O’Malley (1955), “The Relations of John Caius With Andreas Vesalius and Some Incidental Remarks on the Guinta Galen and on Thomas Geminus,” in Journal of the History of Medicine and Allied Sciences Vol. 10.2 pp.147-172.

9. Thomas Vicary (1577 [1548]), A Profitable Treatise of the Anatomie of mans body: compyled by that excellent chirurgion, M. Thomas Vicary esquire, seriaunt chirurgion to king Henry the eyght, to king Edward the. vj. to Queene Mary, and to our most gracious Soueraigne Lady Queene Elizabeth, and also cheefe chirurgion of S. Bartholomewes Hospital. Which work is newly reuyued, corrected, and published by the chirurgions of the same hospital now beeing, London.